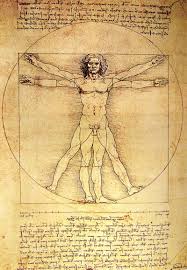 Vitruvius, the ten books on architecture

The pen and ink drawing by Leonardo da Vinci, depicting a man fitting his body to a circle and a square by adjusting the position of his arms and legs, is probably the most famous drawing in the world.
Vitruvius was an ancient Roman architect who wrote a series of ten books on architecture – one of the few collections of books of its type that survived into the Renaissance. In the third volume, which is on the proportions of temples, he states that these buildings should be based on the proportions of man, because the human body is the model of perfection. He justifies this by stating that the human body with arms and legs extended fits into the perfect geometric forms, the circle, and the square. This fragment of the philosophy of Pythagoras seized the imagination of the Renaissance. Many artists tried to illustrate this divine relationship, but with varying success.
In Venice around the year 1500, Leonardo once again demonstrated geometrically that the human soul is divine.