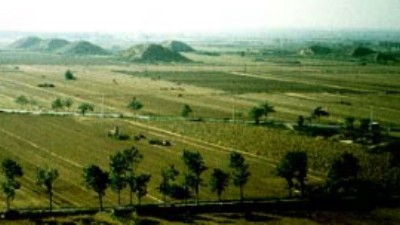 As Art Exhibition Curator for the Habsburg Haus of Austria,

.
Klaus has organized exhibitions world wide.
With this background his approach to archeology
is unconventional. He has traveled the world in search of unique and
unexplained findings. Intrepid and unrelenting, he is on a mission to
bring to the eye of the public such finds as giant bones, carvings and
sculptures in forms that do not fit into the contemporary view of our
timeline.
Klaus held the world’s first
‘Unsolved Mysteries’ exhibit to Vienna in 2001.
.

.
Also notice the very ancient Eye of Providence exactly like the one on the back of the US dollar and
on the founding documents of Weishaupt’s Illuminati proving the secret
societies of the Elite go back thousands of years and is not just a
recent conspiracy theory.
The over 400 original
artifacts on display revealed a forbidden archeology and pointed to lost
civilizations whose acceptance would re-write history. Crystal skulls,
ancient world maps, mysterious continents,
Atlantean relics, golden
space craft, tools that defy modern technology, magnetic pyramids that
glow under ultraviolet light, and evidence of giants 25 feet tall!

Convincing presentation showing evidence of a highly advanced
civilization that covered all parts of the globe.

Evidence of pre-Sanskrit writing found worldwide confirms a global civilization as
depicted in the Vedic writings of India.

Worldwide pyramids, nonhuman
skulls and advanced artifacts tell a very different history than that
told to us by mainstream archaeologists.

.
The head piece of the South American looks like
a fish. Coincidence that the popes hat is a fish head?

Orion,Sirius,humans,dolphins & whales (sea mammals) all connect.
Dogon tribe talks of aquatic like beings coming from a planet in the
Sirius B star system.

Perhaps sea mammals are originally from that
planet?

And humans (land mammals) are from another similar planet?

Dolphins are perplexing in their intelligence and language and they communicate with clicks and so do certain african tribes. So do I …. weird 🙂