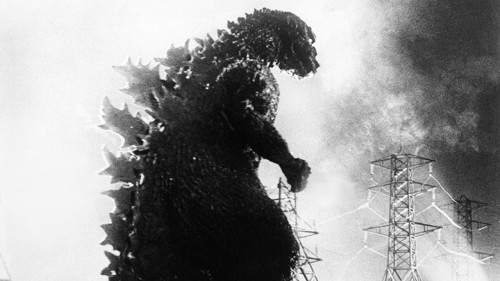 Godzilla is a daikaijū, a Japanese movie monster, first appearing inIshirō Honda‘s 1954 film Godzilla. Since then, Godzilla has gone on to become a worldwide pop culture icon starring in 28 films produced by Toho Co., Ltd. The monster has appeared in numerous other media incarnations including video games, novels, comic books, television series, a 1998 American remake and a second American version is in development.

With the atomic bombings of Hiroshima and Nagasaki and the Daigo Fukuryū Maru incident still fresh in the Japanese consciousness, Godzilla was conceived as a monster created by nuclear detonations and a metaphor for nuclear weapons in general. As the film series expanded, some stories took on less serious undertones portraying Godzilla as a hero while other plots still portrayed him as a destructive monster; sometimes the lesser of two threats who plays the defender by default but is still a danger to humanity.